Today, we painted our bus!  Well, we primed it.  Tomorrow we will lay the final forest green color.  While we loved the rainbow colors, some of the paint was chipping, and some parts were rusted.  We talked about trying to salvage the colorful bus, but decided that it would be best to just repaint it, and eliminate the headache of color matching and untackled rust areas.

We used our new (to us) air compressor, an 11 gallon set at 40PSI at 4 CFM. We also used the paint gun, which was unbelievably easy and super fun.  I’m not going to lie, I felt pretty badass painting with a paint gun.  The paint gun did have some left over gunk from two years ago in it, but as soon as we took it apart and cleaned it with acetone, it worked like a charm.

For the primer, we simply used the same Rusty Metal Primer by Rustoleum that we used on our floors. We washed and dried the bus, grounded or wire brushed all loose paint and rust, and removed all of the windows, except for the three that I caulked (they were stuck in there pretty well).  We then taped up all the other unremovable windows and lights, and finally removed the two windows that were broken by a BB gun when we bought the bus.  We didn’t bother doing anything to the front double doors, because we plan on replacing them with a better door.

We ended up using two and a half gallons of the rusty metal primer altogether (3/4 gallon rolling on the floor, and the rest spraying on the exterior).  Tomorrow we are going to put down the forest green rustoleum paint!  We can’t wait to see how it turns out.  Tomorrow, I will wear gloves and a respirator to avoid painted hands and painted nostrils.

I even got to test out the green color by finally christening our bus… By writing thewolfbus.com on the side!  All of our neighbors have been so great and intrigued by our project.  Honestly, we were worried that some people might complain about the giant bus parked on the street, but we are absolutely elated that everyone has been so cool with it! 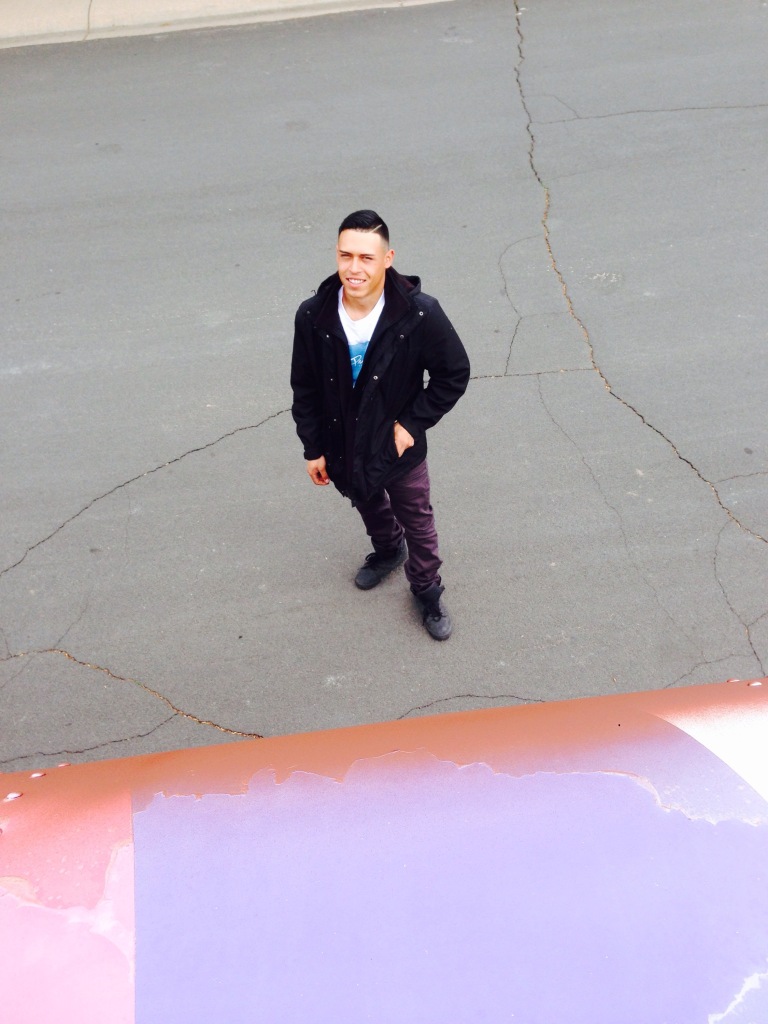 We have also received so much help from friends during this whole process.  Our good friend Abe is going to help us paint features on our bus; wolf eyes on the front, and a wolf on the side!  Today, Justin’s coworker Raul even stopped by to help drill out some rivets. Ben also stopped by!

Our other good friend Anders, who just had shoulder surgery last week, came to lend one helping hand today despite being in a sling!

We are so excited that we have had so much support and help in this whole endeavor.  It’s so great to be surrounded by so many great people!!

Well, time for a bonfire and some beer.